Largest castle in the world

Malbork Castle in the north of Poland is the largest castle in the world measured by land area and was designated a World Heritage Site in December 1997 by UNESCO. Located on the east bank of the River Nogat, this Gothic brick-built fortress once belonged to the Teutonic Order and it served as their headquarters for almost 150 years.

Originally a fortress named Marienburg, the Teutonic Knights began this incredible construction in the 13th century and the structure took shape in various stages. Initially, the construction consisted of a formidable central bastion called the High Castle. The Middle Castle and Lower Castle followed and finally, the complex was encircled by three rings of defensive walls strengthened with towers and dungeons. The Teutonic Knights were a German Catholic religious order of crusaders with considerable military power; however, Malbork was seized by the Polish Army in 1457 during the Thirteen Years’ War at a time when the strength and influence of the Order had started to diminish. Over the years, the castle has been home to many different occupiers including the Prussians who turned the castle into a barracks and in the process, dismantled parts of the complex with no military significance and also caused major damage to the interior decoration. The castle sustained further damage during WWII. 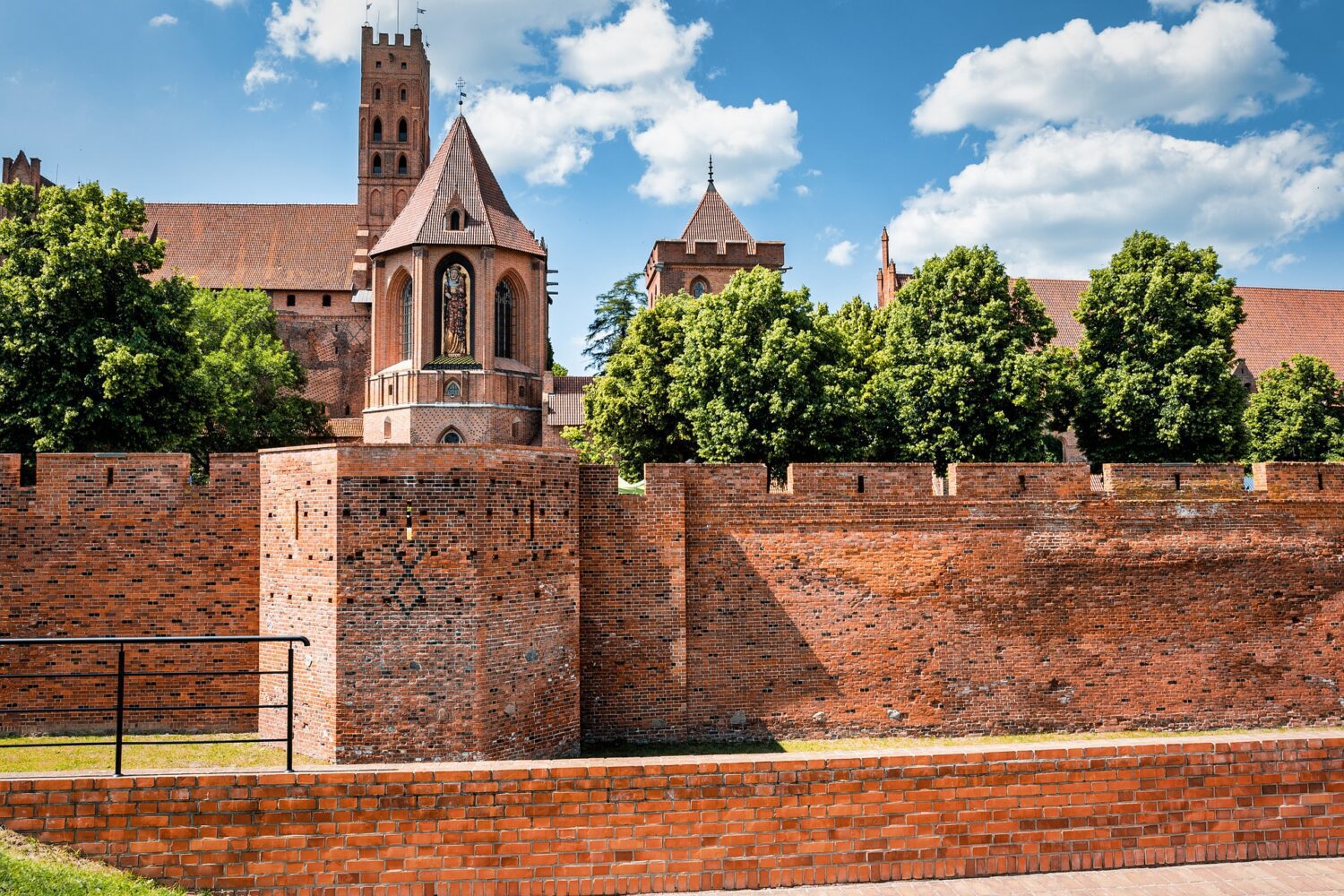 Despite all of this and thanks largely to intervention and restoration, the castle today looks like it did 600 years ago and almost the entire complex has been preserved. Restoration and conservation work was carried out in the 19th and early 20th centuries and also at the end of WWII with many forgotten medieval art and craft techniques being rediscovered.

Visitors to the castle can take advantage of an audio guide that utilises GPS with a set route, which if followed ensures that everything that is worth seeing is seen. There are also amenities at the ticket office such as toilets, refreshments and lockers.

During your visit, you’ll see the Middle Castle courtyard, the Grand Masters’ Palace with its 450 m2 Great Refectory, the Amber Museum, St Anne’s Chapel (where 12 Grand Masters were buried), High Castle, the Gdaniska (the Knights’ loo), St Mary’s Church and a multitude of other delights such as drawbridges & Gothic doorways.

If you are planning to visit Malbork, the castle is definitely worth a visit, it’s one of the most popular tourist attraction in Poland and it is a perfect destination for history buffs, architecture enthusiasts and for everyone who enjoy the Medieval era.

Here are some frequently asked questions about the castle:

Q: What is the history of the castle?

A: The castle was built by the Teutonic Knights, a German medieval Christian military order, in the 14th century. It was originally called the Marienburg Castle and it served as the headquarters of the Teutonic Order and as a residence for the Grand Masters of the order. The castle also played an important role in Polish-Teutonic Wars. The castle was captured and reconstructed many times through the centuries. It was rebuilt by Polish kings and was later used as a prison, an arsenal, and a museum.

Q: How big is Malbork Castle?

A: The castle is one of the largest castles in the world, covering an area of 143,591 square meters. It has three main sections – the High Castle, Middle Castle, and Lower Castle. It also features an impressive collection of Gothic architecture and defensive walls.

Q: Is the castle a UNESCO World Heritage Site?

A: Yes, the castle is a UNESCO World Heritage Site, added to the list in 1997.

Q: What can be seen at the castle?

A: Visitors to the castle can see the impressive medieval architecture and defensive walls of the castle, as well as learn about its history through displays and exhibits. The castle also includes a museum of the Teutonic Knights and art from the Middle Ages. There are also guided tours offered to visitors which includes access to certain areas of the castle that are not open to the general public.

Q: How to get to Malbork Castle?

A: The castle is located in the city of Malbork, Poland. It can be reached by car, train or by bus. The nearest train station is in Malbork, and the castle is a short walk from the station.

Q: What is the best time to visit the castle?

A: The best time to visit the castle would depend on your personal preferences. The castle is open year-round and it may be quite crowded during the peak summer season. If you prefer to avoid the crowds and have a more leisurely visit, it might be best to visit during the shoulder or off-peak season. The castle also has a number of events held in the area throughout the year like Medieval Festival, Knight Tournament and similar, so if you are interested in that, plan your visit accordingly.

Wawel Royal Castle is a historic castle located in Krakow, Poland. It is situated on Wawel Hill and overlooks the city. The castle has a long and complex history, with the original fortifications dating back to the late 9th century. The current architectural style of the castle is primarily Gothic and Renaissance, with some Baroque and Renaissance elements. The castle has been expanded and remodelled over the centuries, and it has served as a royal residence for Polish kings throughout history.

The Royal Castle and the limestone Wawel Hill are extremely important historical and cultural sites containing one of the most important collection of buildings in Poland. 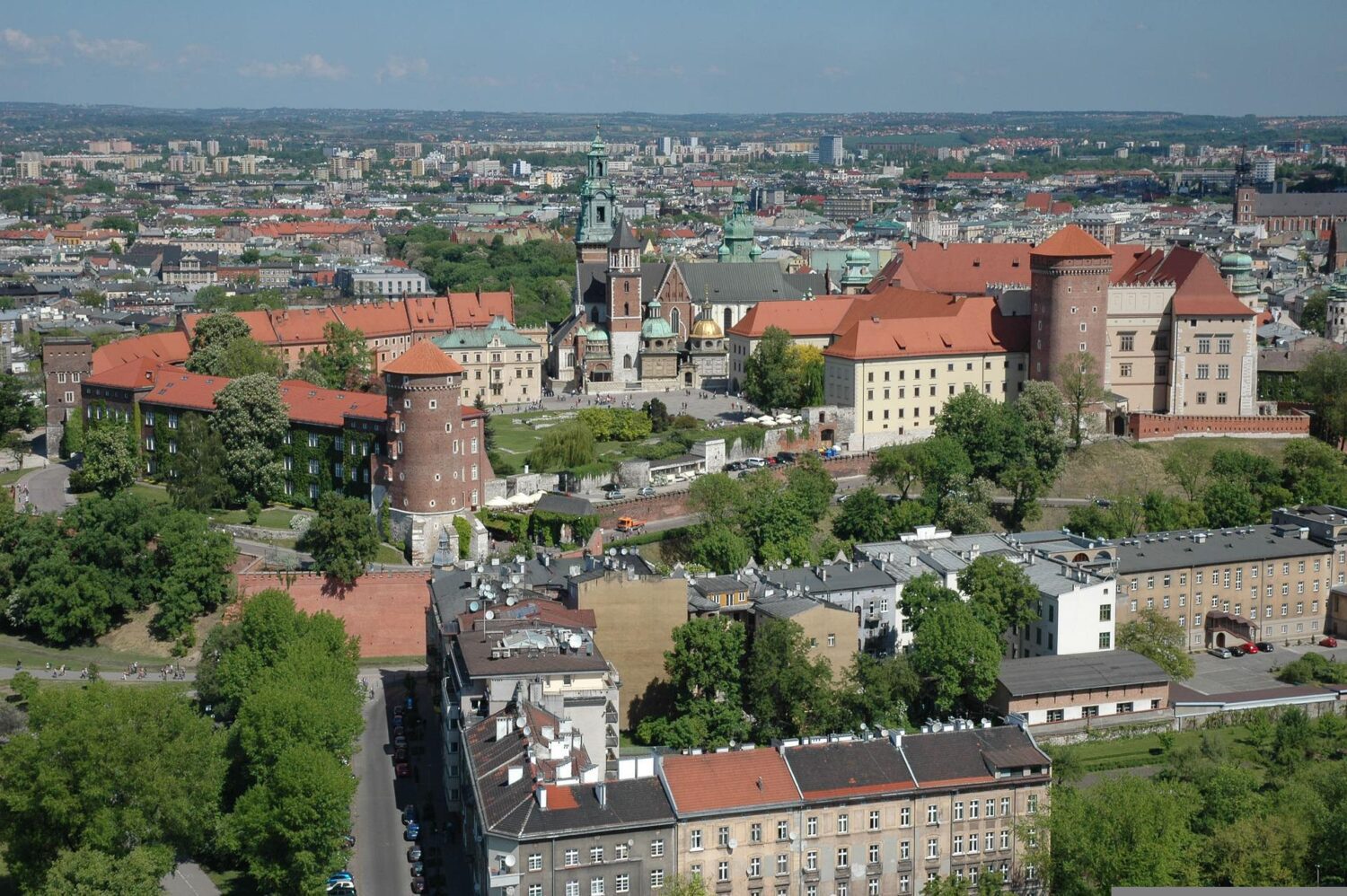 Wawel was once the seat of Polish rulers, the residence of kings and the focal point of many Polish historical events. The hill is a symbol of the Polish nation and has witnessed some of the greatest moments in Polish history. 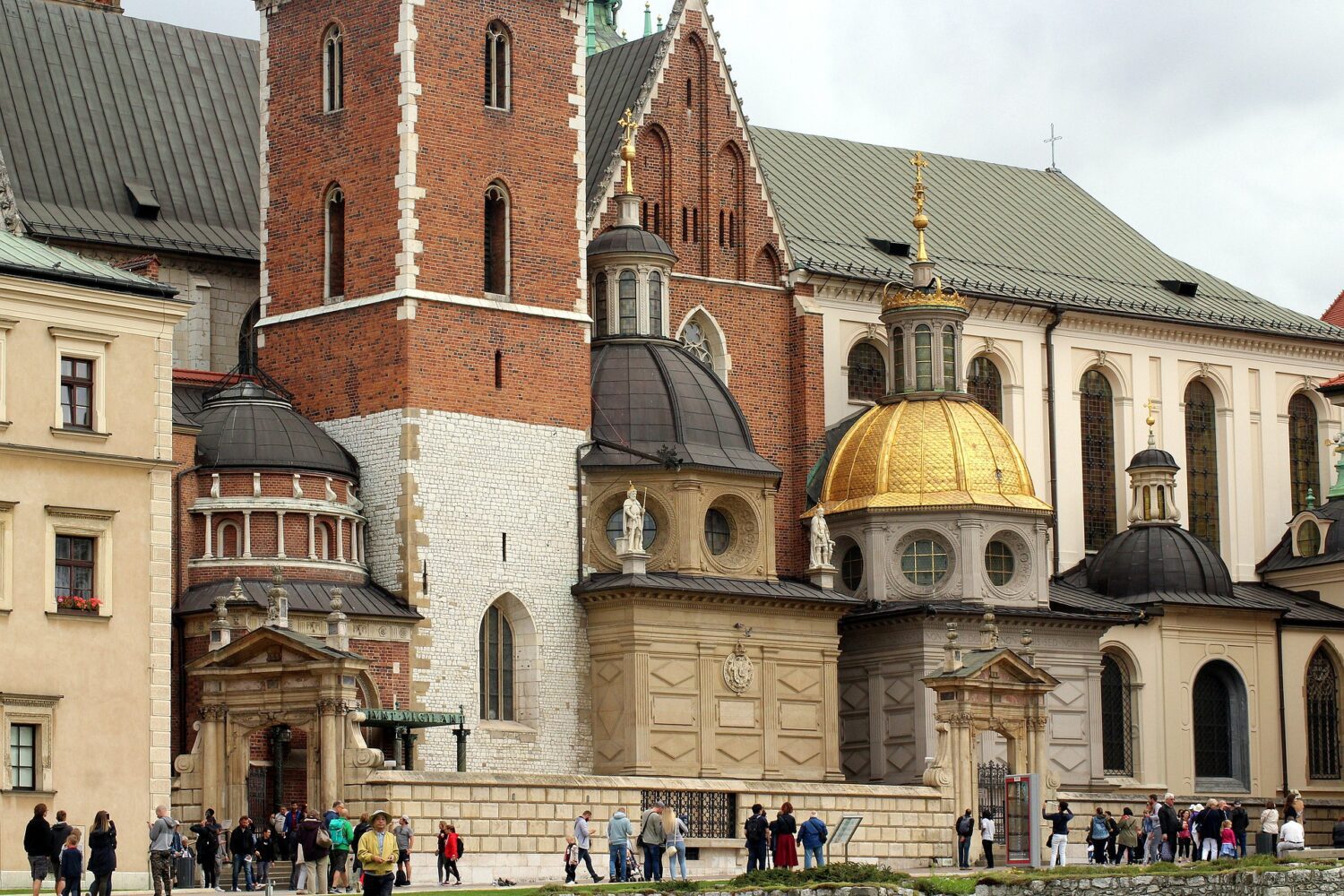 The castle complex includes several buildings, such as the Royal Castle, the Cathedral, the Wawel Dragon’s Den, and the Royal Residence. The Royal Castle contains several museums and art collections, including the Crown Treasury and Armoury, the State Rooms, and the Royal Private Apartment. The Cathedral is the coronation site of Polish kings and the burial place of many Polish monarchs, national heroes, and poets.

Located south of the old town and next to the Vistula River, Wawel Hill showcases an incredible assortment of architectural delights including Renaissance, Gothic and Romanesque designs. The Royal Castle and the Cathedral are must-see attractions and a walk around the castle courtyards and open spaces are highly recommended.

Today, the Royal Castle is home to a superb art museum, which is well-known throughout Europe and the World because of its collection of Italian Renaissance paintings, the Sigismund II Augustus tapestry collection, sculptures, ceramics, period furniture and textiles among others. 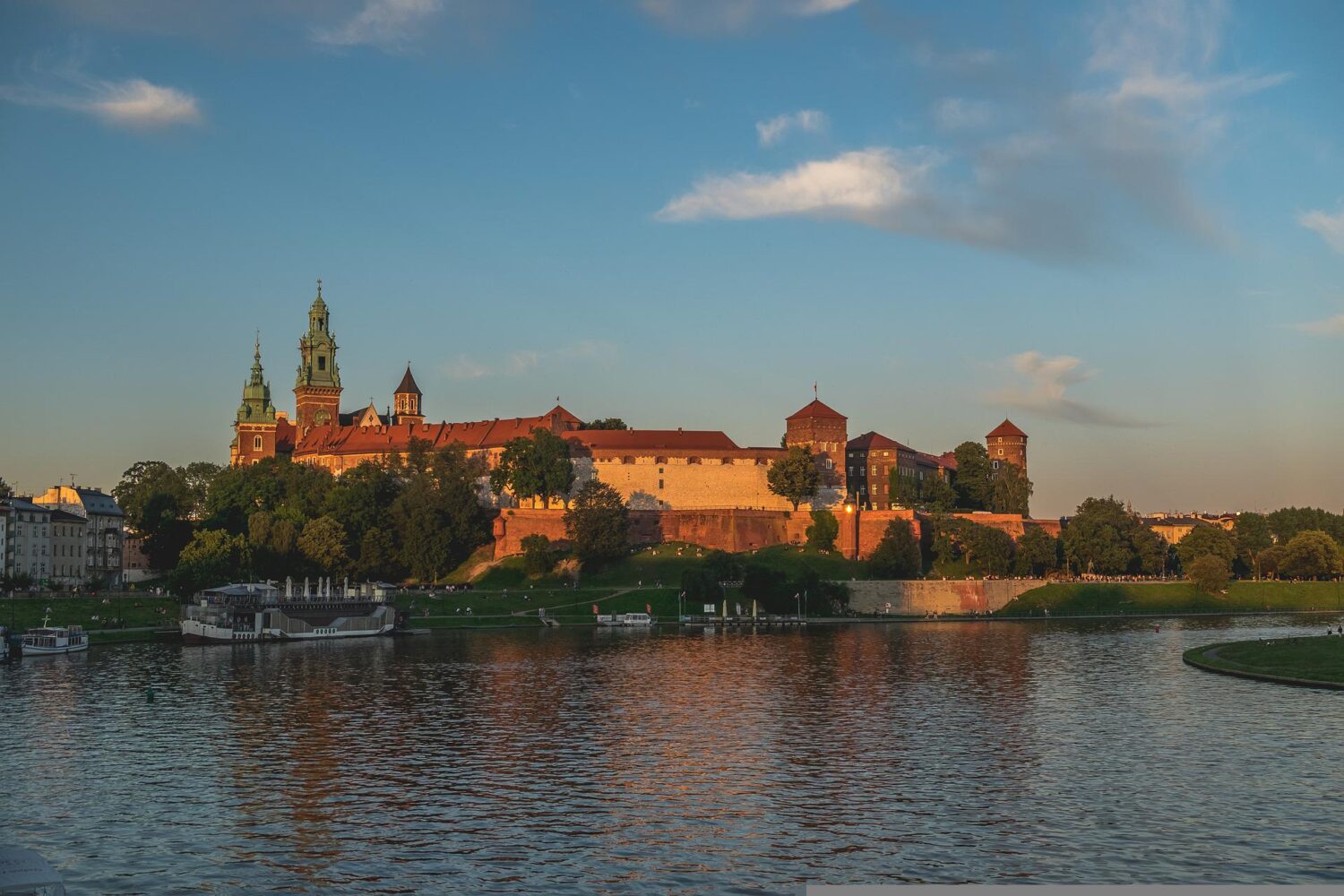 Wawel Hill has a long history, which can be traced back to the year 1000 when the first cathedral on Wawel Hill was built. Since then, Wawel has experienced many different timelines ranging from its Golden era from the 14th to the 16th centuries to the start of its decline as a centre of importance in 1609; when the then King moved his court to Warsaw.

The Royal Castle was the cultural and political heart of Poland during the 16th century and today, it stands as a potent symbol and reminder of the Polish national identity. Visitors to Wawel Royal Castle today will see a 16th century Renaissance palace; however, before this, it was a formidable Gothic castle; which was burned down in 1499

Over the years, the castle has been repeatedly sacked and vandalised. Extensive restoration work has been carried out since and many of the castle’s external structures and interior decorations have been recovered.

The castle and its grounds are open to the public and are a popular tourist destination in Krakow, and a lot of visitors come to see the impressive architecture of the buildings and to learn about the castle’s rich history.