The Medieval Town owes its origins to the Teutonic Order, which built a castle in the town in the mid-13th century as a base for the conquest and evangelisation of Prussia. This acted as a catalyst for the growth, importance and popularity of the town and it soon developed a commercial role as part of the Hanseatic League. 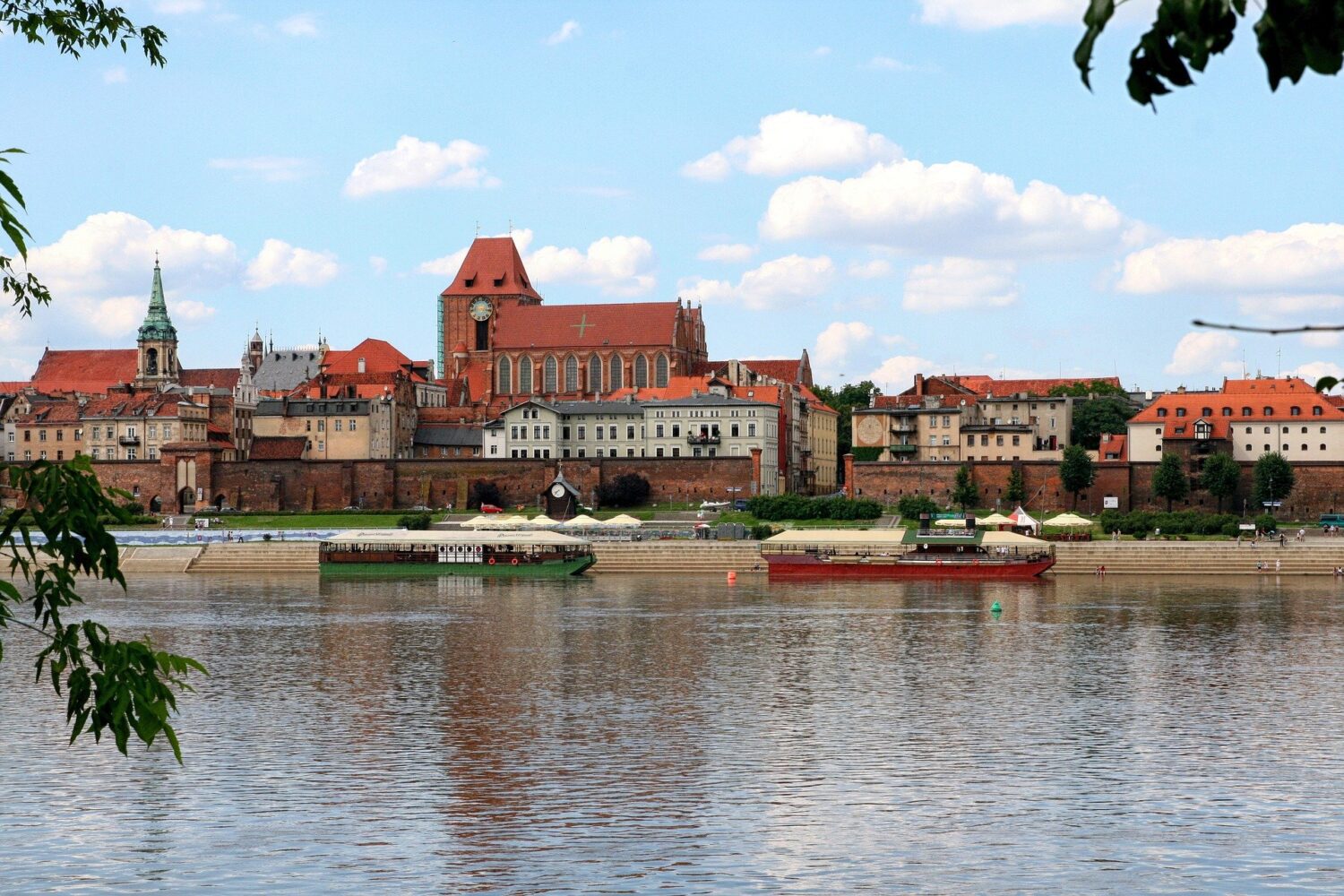 In the old and new town, the many imposing public and private buildings from the 14th and 15th centuries (among them the house of Nicolaus Copernicus) are striking evidence of Torun’s stature.

Toruń is a remarkably well-preserved example of a medieval European trading and administrative centre. The city was founded in the period when Christianity was being spread through Eastern Europe by the military monks of the Teutonic Order, and when rapid growth in trade between the countries of the Baltic Sea and Eastern Europe was being spurred by the Hanseatic League.

The Medieval Town of Torun is comprised of three elements: the ruins of the Teutonic Castle, the Old Town, and the New Town, all surrounded by a circuit of defensive walls.

The majority of the castle was destroyed during an uprising in 1454, when the local townspeople revolted against the Teutonic Order. The ruins and the archaeological remains have been excavated and safeguarded.

An exceptionally complete picture of the medieval way of life is illustrated in the original street patterns and early buildings of Toruń. Both the Old Town and the New Town have Gothic parish churches and numerous fine medieval brick townhouses, many of which have retained their original Gothic façades, partition walls, stucco-decorated ceilings, vaulted cellars, and painted decoration.

Many townhouses in Toruń were used for both residential and commercial purposes. A fine example is the house in which Nicolaus Copernicus was reputedly born in 1473; it has been preserved as a museum devoted to the famous astronomer’s life and achievements.

The townhouses often included storage facilities and remarkable brick granaries, some of which were up to five storeys high. Because so many houses have survived from this period, the medieval plots are for the most part still preserved, delineated by their original brick boundary walls.

Today, the Medieval Town of Torun shares the title of capital city of the Kuyavian-Pomeranian Voivodeship with the city of Bydgoszcz. The entire city is listed as a UNESCO World Heritage site for being an unusually well-preserved example of a medieval European trading and administrative centre.

The Medieval Town of Torun has benefited from numerous renovation projects in recent years, in particular the Old Town area. Buildings, pavements, streets and squares have been painstakingly reconstructed reversing them to their historic appearance.

Q: What is the history of the Medieval Town?

A: The Medieval Town was founded in the 13th century by the Teutonic Knights, a German medieval Christian military order. It quickly grew in importance as a trade and cultural center, and it was known for its production of textiles, ceramics, and gingerbread. Torun was also an important center of learning, and the famous astronomer Copernicus was born and studied in the city. Torun suffered considerable damage during WWII, but it has been carefully restored to its medieval appearance and is now a popular tourist destination.

Q: What kind of architecture can be seen in the Medieval Town?

A: It is known for its well-preserved medieval architecture, particularly Gothic-style buildings from the 14th and 15th centuries. The city is home to a number of churches, including the Church of the Holy Spirit, which has a beautifully decorated interior and an ornate bell tower. Visitors can also see the town hall, which dates back to the 14th century, as well as the city walls and defensive towers, which have been preserved and restored.

Q: Is the Medieval Town of Torun a UNESCO World Heritage Site?

A: Yes, the Medieval Town is a UNESCO World Heritage Site, added to the list in 1997.

Q: What can be seen there?

A: Visitors to the Medieval Town can see the well-preserved medieval architecture, and take a stroll through the charming and picturesque streets of the Old Town, which is home to many historical buildings and landmarks. Visitors can also visit the Copernicus Museum, which is dedicated to the life and work of the famous astronomer, and the Gingerbread Museum which showcases the traditional craft of gingerbread-making. There are also many shops, cafes, and restaurants where visitors can try the famous Torun gingerbread and other local specialties.

Q: How to get there?

A: The Medieval Town is located in northern Poland. It can be reached by car, train or by bus. The nearest airport is in Bydgoszcz, which is around 30 km away. There are also regular train and bus connections to Torun from other major cities in Poland.

Q: What is the best time to visit?

A: The best time to visit Medieval Town would depend on your personal preferences. The town is open year-round, but it may be more pleasant to visit during the warmer months when the weather is more favorable. The Medieval Town of Torun also has a number of festivals, events and cultural happenings throughout the year such as the Copernicus Festival, the Gingerbread Festival, and Torun Night of Museums that could be interesting to attend and plan the visit accordingly. 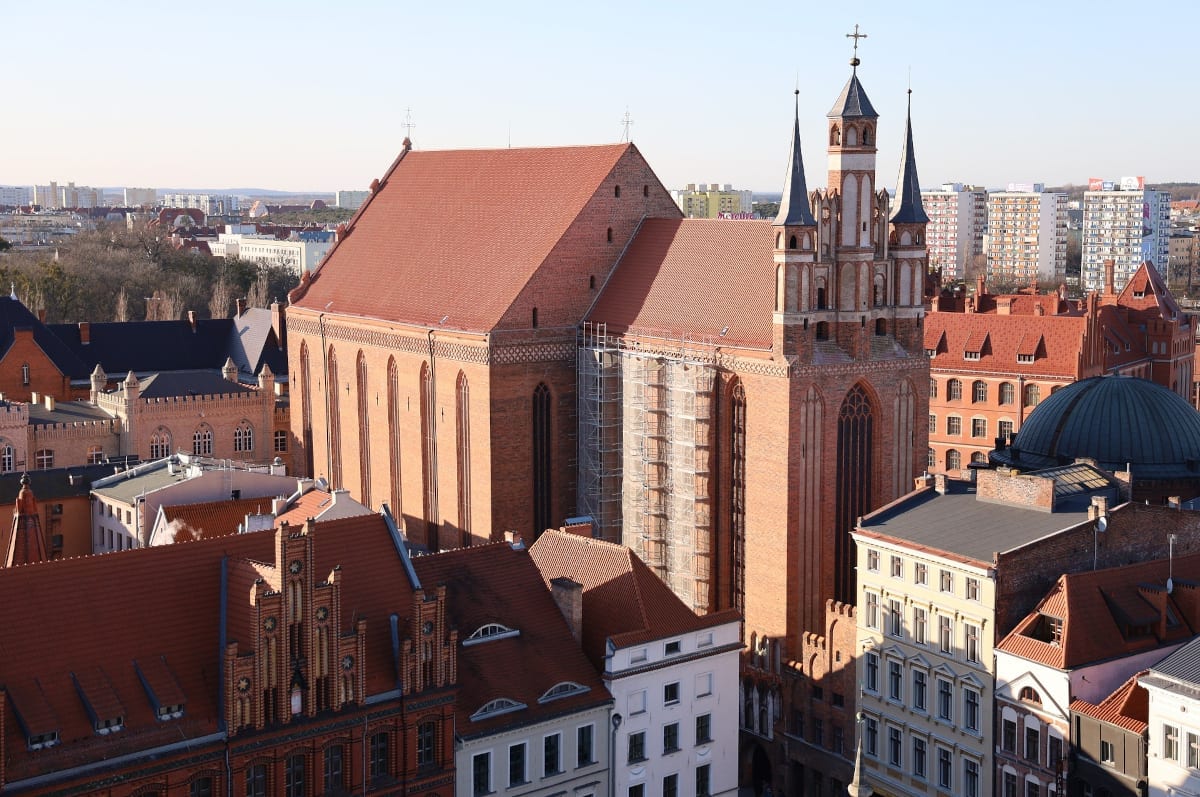 Small, adorable, charming with a big history. All these words perfectly described Torun city. Admire an authentic Old Town city which wasn’t destroyed during the wars. It has one of the most beautiful town squares in all of Europe. As a historic site Torun ranks as high as Cracow or Gdansk. It was even included in the UNESCO World Cultural and Natural Heritage List.

Start your 2-hours tour from Theatre of Wilam Horzycy and admire this white and nice building. Next you will see the Planetarium – the unique attraction showing lesson about universe. During this trip you will discover many interesting monuments as John Paul II, Nicolaus Copernicus, the Donkey and more. Look inside fair Church of Holy Spirit. Hear the legend and try to stand upright under the Leaning Tower. Feel the vibe of Market Square and Arthur’s Court. Stop at scenic spot and look at beautiful Vistula River. Then continue to the stunning Cathedral of St. John the Baptist and St. John the Evangelist.

To explore the city even better choose 3-hours option and follow guide to discover ruins of Church and Dominican monastery. Walk toward remains of Teutonic Knights – Medieval Defensive City Walls which symbolizes old-time power of knights. Now you can step like one of them. See also a unique and nice construction of Baj Theatre.

In 4-hours option you will also enter fantastic Museum House of Nicolas Copernicus. The exhibitions show his life, his history and achievements. Get familiar with history of the most known astronomer and scientist who change the way of thinking about world. Step into his cosmos world in his authentic house.