There’s a lot to see and do in the city. Here’s our list of the Top 10 things to do in Kielce. Click on the links for further information or to book a tour & buy tickets.

Kadzielnia is one of the most popular tourist attractions in Kielce. The former quarry attracts visitors interested in music, extreme experiences such as ziplining and also geology enthusiasts. It is located on a hill as part of the Kadzielnia Range and is 295m above sea level. As a quarry back in the 18th century, it was a significant source of limestone, which was required primarily for road construction and you can still find traces of mining activity around the area. In the centre is the Geologists Rock and this is protected as part of the Kadzielnia Nature Reserve and is not open to tourists, instead visitors admire the rock from the surrounding paths and viewpoints surrounding the quarry. You’ll find a number of attractions in Kadzielnia such as the underground tourist route, the amphitheatre, a zip-line station and a waterfall. The Kadzielnia Amphitheater is one of the most unique and beautiful stages in the country. The surrounding rocks provide a natural backdrop and also enhance the acoustics. The amphitheatre has operated for more than 50 years and underwent a thorough modernisation in 2010, today it can seat as many as 5,430 spectators. During inclement weather, the stage and auditorium is covered with a retractable roof. 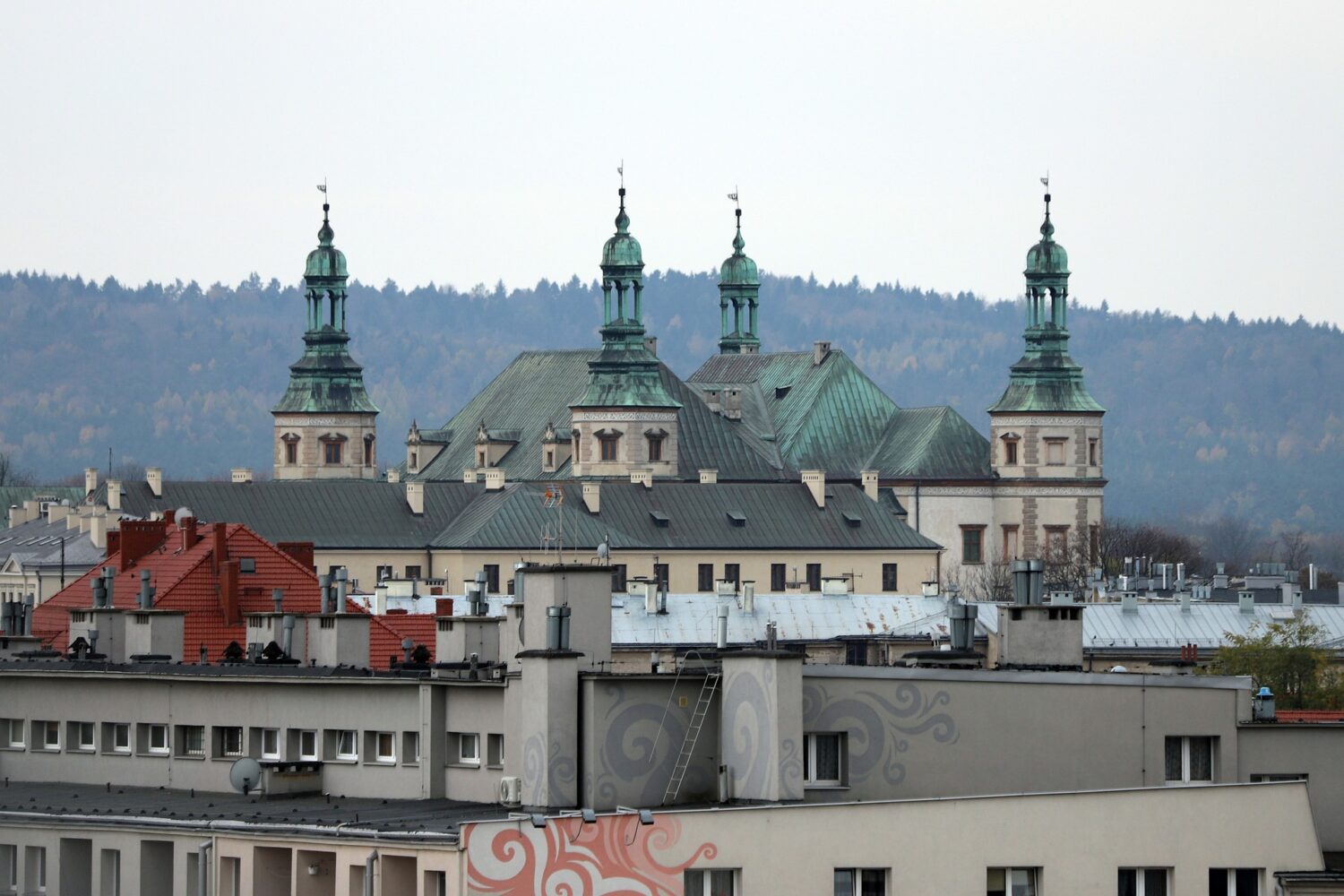 2. Palace of the Kraków Bishops

The Palace of the Kraków Bishops in Kielce was built in the 17th century as a summer residence for the Bishop of Kraków, Jakub Zadzik. The architect of the palace was Tommaso Poncino of Lugano who designed the building using both Polish and Italian building traditions. The design included a loggia with marble columns and four hexagonal domed towers on its corners. Above the loggia’s arches were cartouches with the coats of arms of Bishop Zadzik, the Polish-Lithuanian Commonwealth and the Kraków chapter. At the rear of the palace is a geometric Italian garden surrounded by fruit trees. Currently the palace houses a branch of the National Museum with an important gallery of Polish paintings.

The National Museum in Kielce is located in the Palace of the Kraków Bishops. Its collections include exhibits of Polish and Western European art, antique weapons, coins, archaeology and natural sciences. The art collection includes Baroque and Rococo portrait painting to Realism and Impressionism.

The full name for Kielce Cathedral is the Cathedral Basilica of the Assumption of the Blessed Virgin Mary. It is actually a Roman Catholic church that has been given the status of cathedral and is located in the heart of the city next to the Palace of the Bishops of Kraków on Castle Hill. It was originally built during the 12th century but was subsequently destroyed by the tartars in 1260. Reconstruction of the building began in 1719 in the early Baroque style.

5. Museum of Toys and Play

The Museum of Toys and Play is the largest and oldest museum of this type in Poland. It has an exhibition area of 631 square metres and thousands of exhibits. You’ll find historical and folk toys, dolls from all over the world, model cars, aeroplanes, boats, railway models, theatrical dolls and much more. Many of the exhibits are interactive and children are encouraged to get involved. The museum has two play areas, one indoors and the other in the courtyard, which is open during the summer. You’ll find the museum in the 19th-century market hall at Plac Wolności

Kielce’s historic market square has been the administrative heart of the city since the middle of the 14th century. On the west side of the square if the Neoclassical city hall and just to the left of this on the corner of Ulica Mała, you’ll find an adorable painted blue house with a small arcade containing a café, which dates from 1767. The house once belonged to the Bishop of Kraków’s cook.

Ulica Jana Pawła II on the southern slope of Castle Hill is home to the only 18th century wooden mansion still standing in Kielce. It is considered to be one of the city's architectural treasures and a visit there is a great way to tap into the folk culture of the Świętokrzyskie Voivodeship. Today it serves as the administrative office of the Open-Air Museum of the Kielce Village and hosts temporary exhibitions.

The Sanctuary of the Holy Cross Wood Relic and Museum of the Missionary Oblates of the Virgin Mary are located on Łysiec mountain, nowadays referred to as Święty Krzyż mountain. Święty Krzyż (Mount Holy Cross) is the second highest mountain in the region at 595m. If you believe local folk legend, the mountain was especially liked by witches and during their Sabbaths, they practised witchcraft and organised hellish parties and dances on the summit. Today, you can see remains of a 9th century stone rampart surrounding the top of the mountain in addition to the Benedictine monastery with its Relics of the Holy Cross Tree. The 1000 year old monastery is managed by the Missionary Oblates. Every year, the Holy Cross Sanctuary is visited by crowds of pilgrims, visitors and tourists, who want to see this unique place. In the church on the mountain you can see a valuable painting of Franciszek Smuglewicz, monastery porches, a sacristy, the Oleśnicki family’s chapel and the Museum of the Missionary Oblates of the Virgin Mary.

Karczówka Monastery was built shortly after the city of Kielce was spared from a plague epidemic in 1622 by the Bishop of Kraków to say thank you to God for sparing the city. In 1655, the monastery was destroyed by the Swedes and was re-built in the early 18th century. The structure is crowned by two copper-covered cupolas and is decorated in the Rococo style. It has a lovely chapel under the main tower with an altar piece made from lead discovered in Karczówka’s mines in 1646.

You’re find this lovely 8 ha park at the southern foot of Castle Hill. It features a large pond, willow trees, a fountain, a mature forest and an aviary containing a variety of rare birds.