There’s a lot to see and do in the city. Here’s our list of the Top 10 things to do in Poznań. Click on the links for further information or to book a tour & buy tickets.

Also known as Cathedral Island, Ostrów Tumski is an island between two branches of the river Warta in the city. Poznań Cathedral and other ecclesiastical buildings occupy the central part of the island, which is part of the city’s former New Town district, although it is actually the oldest part of the city and is the place where Poznań and the Polish state was founded. The island is 1km east of the Old Town. 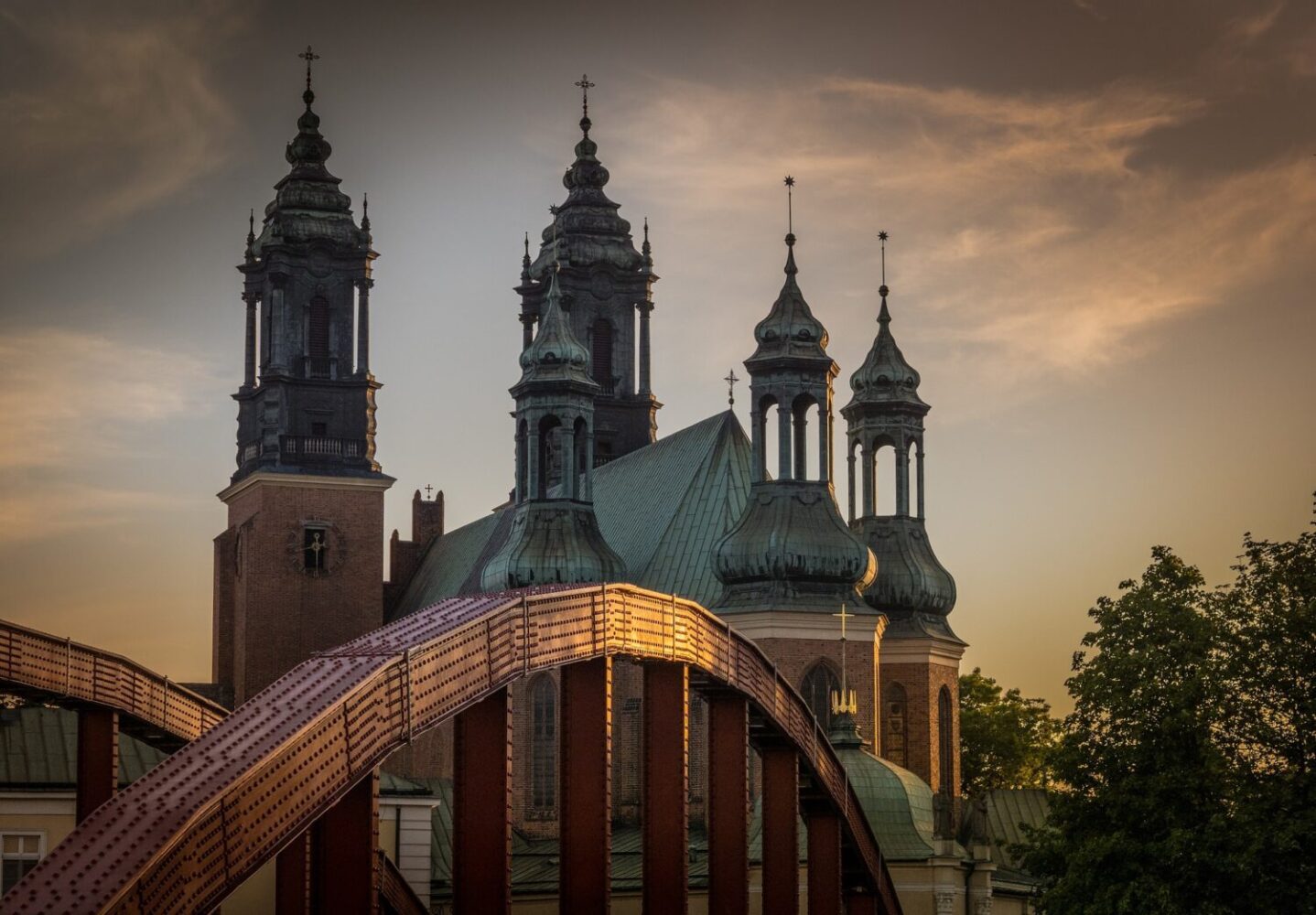 The monumental double towered Archcathedral Basilica of St. Peter and St. Paul is one of the oldest churches in Poland and the oldest Polish cathedral, dating from the 10th century. It stands on the island of Ostrów Tumski north-east of the city centre. The cathedral is Gothic with additions from later periods such as the baroque upper towers. The first two kings of Poland: Mieszko I and Bolesław Chrobry are buried there.

Poznań’s Renaissance town hall is a historic city hall located at the old market square in the centre of the Old Town. The structure is topped with a 61m-high tower and is home to the city’s Historical Museum. Situated above the clock is a pair of small doors which open each day at noon allowing two mechanical goats to emerge and butt their horns together 12 times. Originally, the building was a 13th century Gothic structure; however this was replaced in the early 16th century after a fire. The Fighting Goats of Poznań is one of the top tourist attractions in the city. The mechanical goats have been battling it out since the year 1551, due to a story about burnt deer. In the 16th century the town chef was cooking an elaborate feast for the mayor. Distracted by the celebration the young cook overcooked the venison dinner. To salvage the meal, the butcher grabbed two goats from a nearby meadow. Unfortunately, they escaped and darted off towards Town Hall where they ran up the stairs into the tower and locked horns to battle it out. The gowing crowd of onlookers below loved the show so much that the mayor order the local watchmaker to make a mechanism with goats.

The museum is one of the largest in Poland and houses an extensive collection of Polish and European art. You’ll find Polish painting from the past 200 years represented by all the well-known artists such as Jan Matejko and Stanisław Wyspiański.

This museum is a branch of the National Museum in Poznań and is dedicated to the history of the city. It is located in the Town Hall on the Old Market Square. On the 1st floor, you will find the richly ornamented Renaissance Hall containing original stucco work and paintings dating from 1555. The 2nd floor exhibits memorabilia from the past 200 years, artefacts from the Prussian period and documents from the 1920s and ’30s showing what life in the city was like during that period.

East of the Ostrów Tumski at ul Śródka 3 in the Śródka district, you’ll see a magnificent mural painted on the side of a building, which depicts Śródka in the 1920s. Painted by artist Arleta Kolasińska, the mural features some really interesting characters such as a fat-bellied butcher, a trumpeter, a cat and Władysław Odonic, the Duke of all Greater Poland at the time. The mural is very clever because it appears to be three-dimensional.

Rogalowe Muzeum Poznania is a museum of St. Martin’s croissants, located in a historic townhouse on the main square. You can learn about the history of the croissant and get involved with making some. 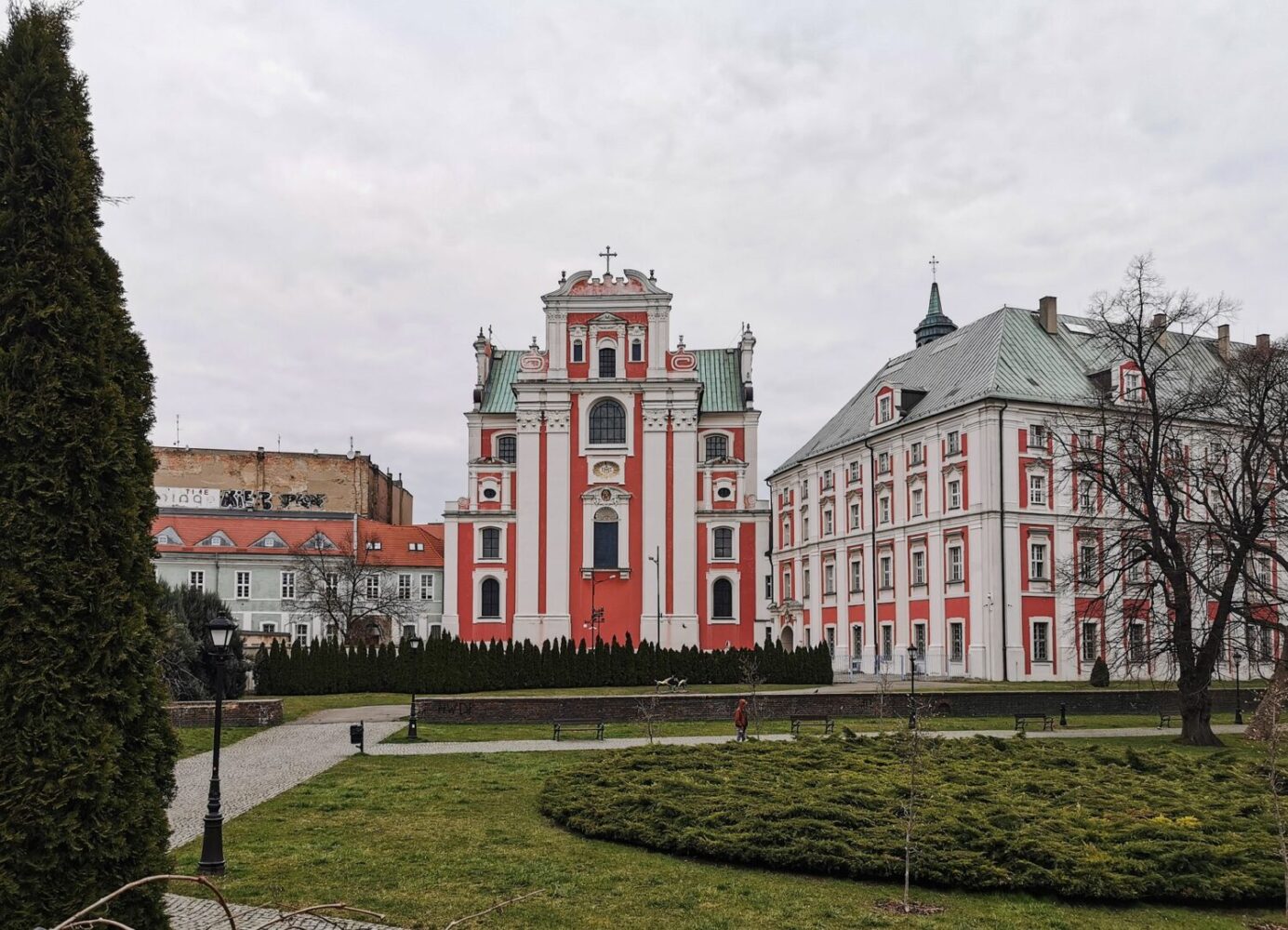 Located on ul Gołębia just two blocks south of the Main Square, you’ll find the Parish Church also known as Poznań Fara, an impressive baroque structure with an ornamented façade built between 1651 and 1701. It is one of the city’s most recognizable landmarks.

The Steam Locomotive Depot is 100km from Poznań in the town of Wolsztyn. It is a working depot with steam engines that haul passengers over a mainline railway track on a daily basis. Visitors get to see all of the activities required to prepare a steam engine for running such as oiling, watering, coaling, as well as carrying out inspections and repairs. They can also see the locomotive shed, the workshop with its forge, a water tower, an ash pit, a water crane, a coal store, and a small museum. On the first Saturday in May, Wolsztyn is also home to the Steam Parade, a festival featuring steam locomotives from across Europe.

A large park on the former site of Fort Winiary, a 19th-century fortified area north of the city centre. It contains two military museums, military cemeteries, and the remains of some of the fortifications.

Q: How do I get to Poznan?
A: The best way to get to Poznan is by plane, with flights available to Lawica Airport. Alternatively, you can take a train or bus to Poznan, or drive if you prefer.