There’s a lot to see and do in the city. Here’s our list of the Top 10 things to do in Bydgoszcz. Click on the links for further information or to book a tour & buy ticket.

Mill Island (Venice of Bydgoszcz) is a historic area located in the Old Town of Bydgoszcz and is home to around 360,000 residents. It is a very popular area for locals and visitors because it is one the most beautiful scenic spots in the city, with a picturesque waterfront, locks and dams, footbridges, lawns, a canal waterfall, old trees and impressive red brick buildings.

The Church of St. Martin and Nicolaus is the oldest building in Bydgoszcz, erected between 1466 and 1502. The Gothic church is commonly known as Fara Church and is home to a 16th century painting entitled Madonna with a Rose or the Holy Virgin of Beautiful Love.

The work of Polish sculptor Jerzy Kędziora, the ‘Man crossing the river’ is an iconic sculpture of a young man attempting to cross the river on a wire. It was unveiled on 1st May 2004, the day that Poland joined the European Union. 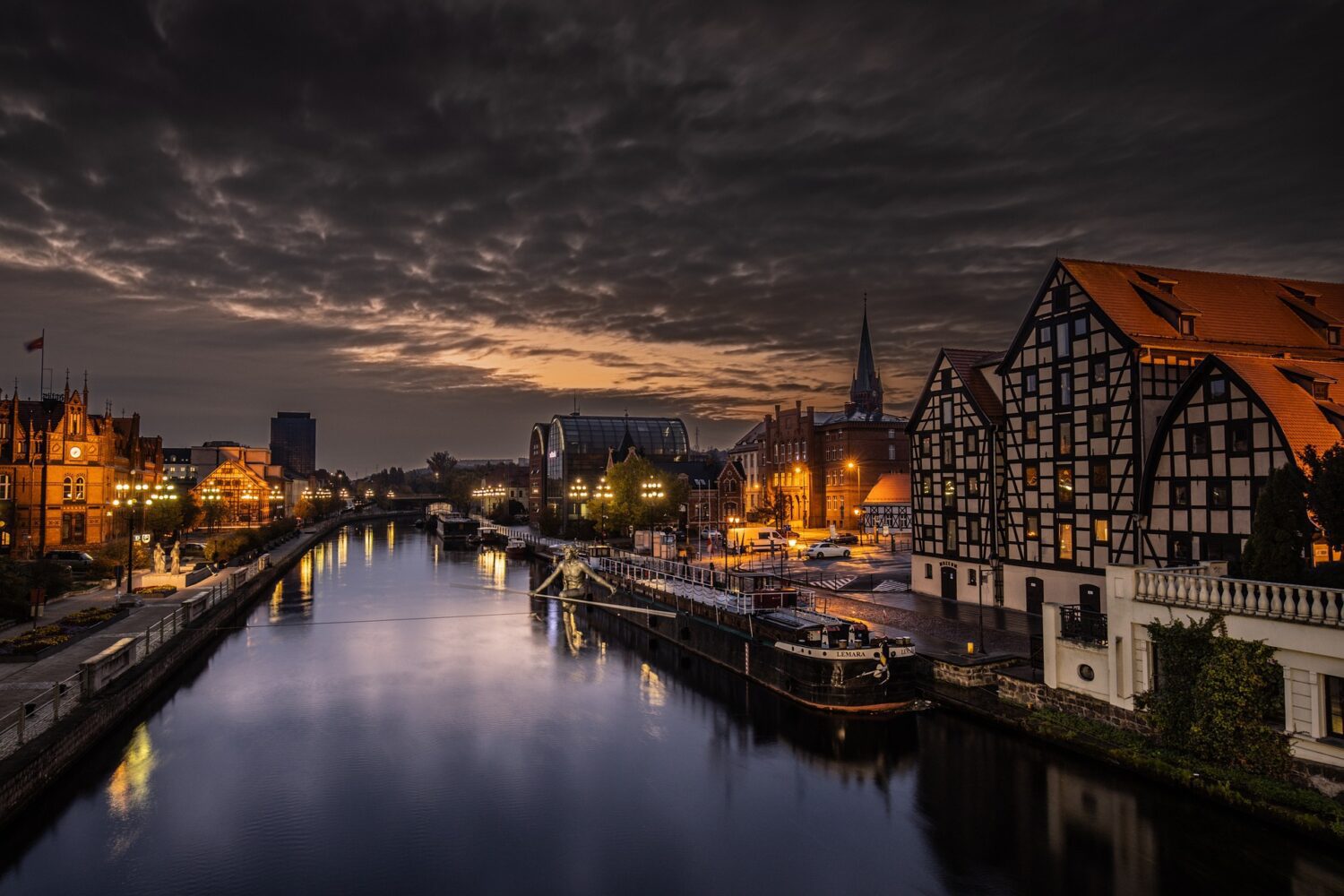 The best way to admire the sights of Bydgoszcz is to take the Water Tram, which starts at Rybi Rynek. Thousands of tourists take the tram each year, which will take you along one of two routes, the Old Town Route or the Sunny Route. The trams named Słonecznik I and II are modern, environmentally friendly vessels, powered by solar energy, which can carry 28 people on board.

Bydgoszcz Canal is a canal, 24.7 km long, between the cities of Bydgoszcz and Nakło in Poland, connecting the Vistula River with the Oder River, through their tributaries: the Brda River, the Notec River and the Warta River. The level difference along the canal is regulated by 6 locks. The canal was built between 1773 and 1774, at the order of Frederick II, King of Prussia. 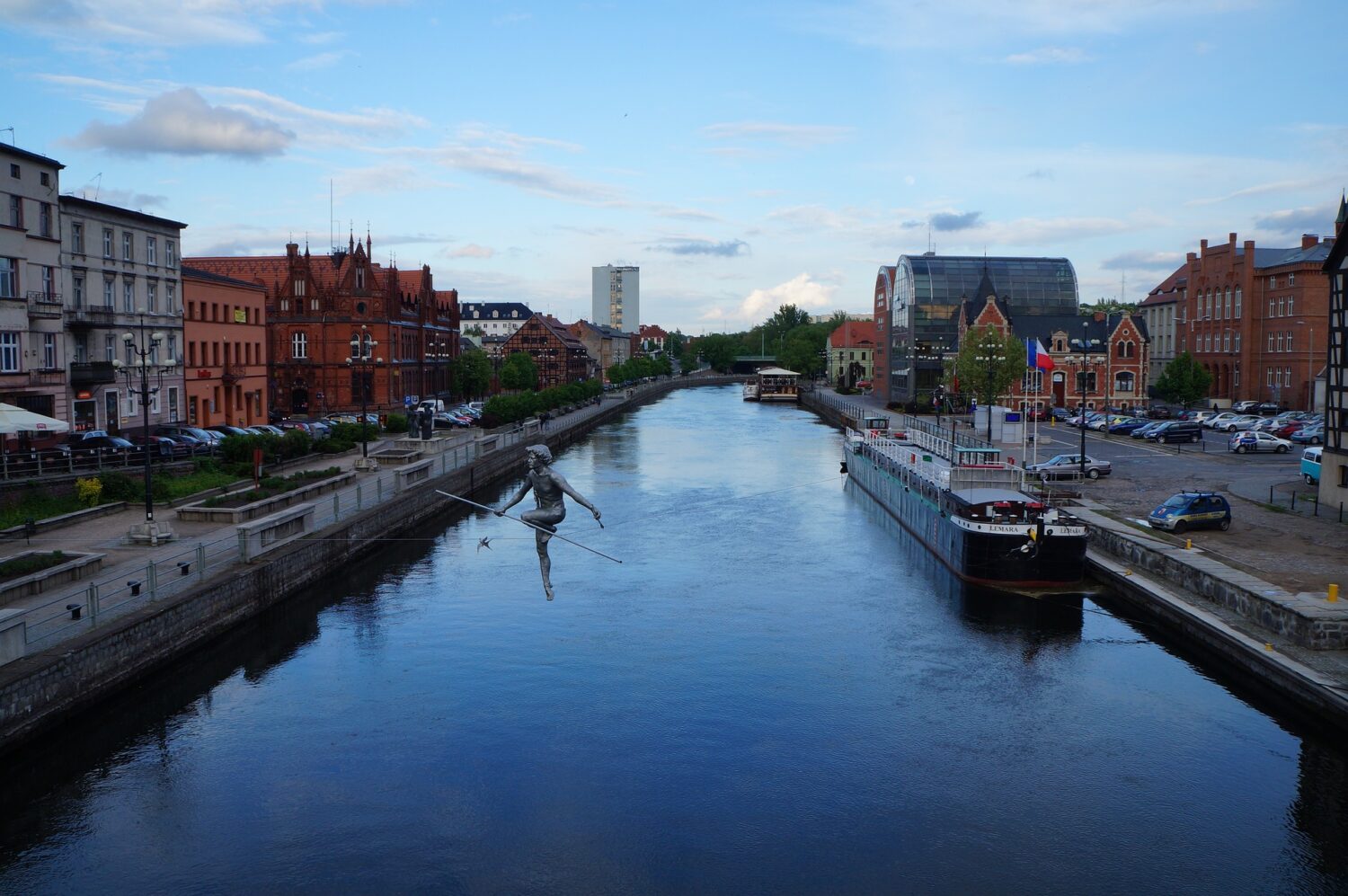 6. Granaries on the Brda River

The Granaries on the Brda River are the symbol of the city and are used as the official city logo. Historically, the granaries were among many grain storehouses in the city, today, they are part of the Leon Wyczółkowski District Museum.

Located in the Las Gdański water intake and Water Tower in the Szwederowo district, the museum of waterworks was established using EU funds. The museum explains how waterworks operate, how does it get to the taps, what happens to waste water when you pull out the plug. In addition, the museum addresses environmental and health issues such as why we should care for water and why we cannot live without it.

8. Museum of Soap and History of Dirt

Interactive time travel through the history of cleanliness, dirt and soap making, which has deep-rooted ties with Bydgoszcz.

The park is extremely popular with the residents of Bydgoszcz due to its excellent transport links with the centre of the city. It covers 830 ha of wilderness, which includes 500 ha of forest.

Still a working post office open 24 hours per day, this is one of the most spectacular buildings located on the Brda riverbank. It was built in the 19th century in the Prussian national style.

Q: What is Bydgoszcz known for?
A: Bydgoszcz is known for its rich history and cultural heritage, with many historical buildings and monuments such as the Old Market Square, the Gothic St. Martin’s Church, and the 19th century Opera Nova. It is also known for its beautiful parks and green spaces, such as the Botanical Garden, the Mill Island and the Park of Culture and Relaxation.

Q: How do I get to Bydgoszcz?
A: Bydgoszcz can be reached by plane, train or bus. The city has its own airport, Bydgoszcz Ignacy Jan Paderewski Airport, which has regular flights from Warsaw, Krakow and Gdańsk. The city is also well connected by train and bus to other major cities in Poland.